The “Mocanita” via ferrata route was opened in 2015, on the Peretele Zanelor (Fairies Wall) rock, near Vadu Crisului, Crisul Repede defile/gorge, in Padurea Craiului Mountains, a subunit of the Apuseni Mountains. The route was built by Salvamont Salvaspeo Bihor, the Romanian mountain rescue unit from Bihor county, with help from CASSIO Montana Bihor club.

All via ferrata routes in Crisul Repede Defile

Map for this route

On the map above, „P” is parking, the red flags mark the start and end of via ferrata, orange route is for access and green route for the return trail.

You go past the Casa Zmeului cave, marked with a sign. At this point you’ll see, on your left, the entrance to the other via ferrata route in this area: (C) „Casa Zmeului”.

Another 5-10 minutes along the railroad and you can see on your left a rock scree which goes up into the forest. This point is marked with a „Via Ferrata” panel. 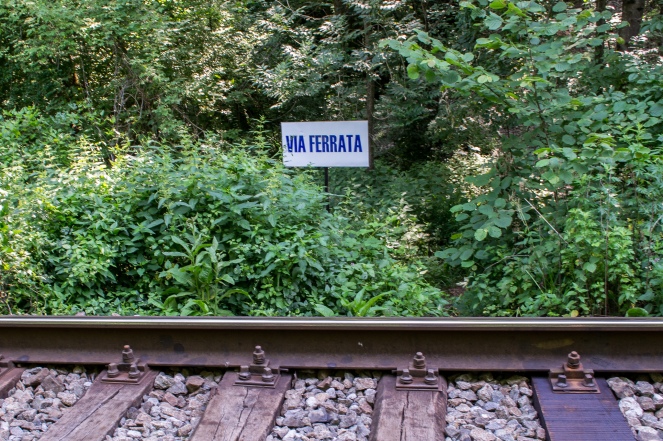 Difficulty: B (easy). Grades are from A (very easy) to E (extreme).

The route is well equipped with many iron staples, making for an easier climb. The vertical climb of only 110m and the short difficult passages recommend this route for beginners, but accompanied by experienced persons only.

For children, the route can be hard and it is recommended that they be secured with an additional rope by an experienced adult.

Duration for the via ferrata route: 1 hour+.

Return trail: You have two options to come back to Vadu Crisului village: 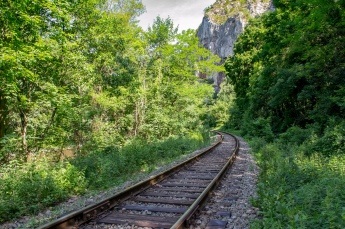 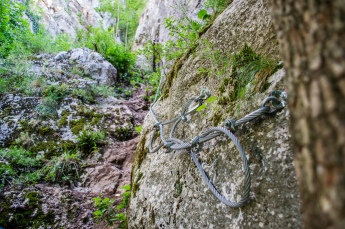 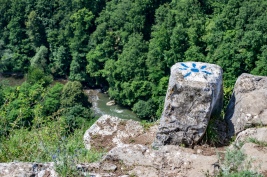